I never beheld a fairer scene.

The Herbert family probably built the ‘little neat cottage,’ which occupied the centre of Dinis Island during the late eighteenth century. This was used by tourists and sightseers visiting the lakes.However, the cottage was allowed to fall into ruin and by 1807 it no longer existed. (Illustrations of the Secenery of Killarney and the Surrounding Country by Isaac Weld, London, 1807).

By the early 1820s the Herbert family had replaced the earlier structure by a ‘large and comfortable cottage on a sloping lawn’.
(A Guide to the Lakes of Killarney by G. N. Wright, London, 1822).This cottage once more provided a venue for visitors to picnic or dine when touring the lakes. It was described by Mr and Mrs S. C. Hall as follows:

"Mr Herbert has built a pretty, picturesque, and commodious cottage, for the gratuitous use of visitors. It is furnished with every requisite for their entertainment; and the housekeeper, a most attentive and obliging person, is ready with her friendly greeting and willing service to those who may require her attendance; a turf fire being always prepared for that necessary portion of an Irish feast – the potatoes; and moreover with ‘arbutus skewers,’ to aid in producing a luxury that may give a new pleasure to the most refined epicure – the salmon sliced and roasted, within a few minutes after he has been a free denizen of the lake."
(A Week at Killarney by Mr and Mrs S. C. Hall, London, 1850).

The surviving Dinis Cottage Visitors’ Book covers the years 1876 to 1883 and is available below.

'Down With The Land Leaguers.'

Responded with: 'Down With The Landlords, Three Cheers For The Land Leaguers.' 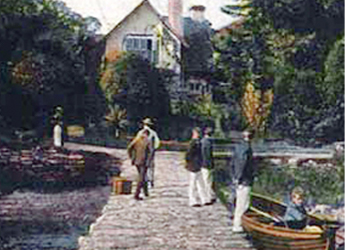